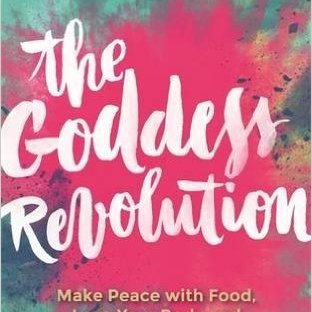 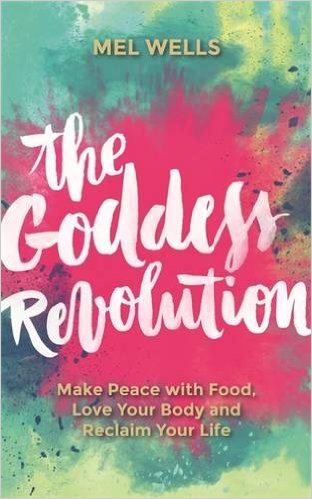 Alright y’all, let’s dig in! My most recent read was The Goddess Revolution. I’ll admit, I was pretty excited for this one. The subheader reads “Make Peace with Food, Love Your Body and Reclaim Your Life.” Without getting too much into my issues, I’ll just say that I’ve struggled with my self-image just about as much as everyone else in the modern world has. While I’ve never hit any extremes, I have always struggled with eating in a healthy, moderate way and with feeling good about my body. So I was really excited to pick up Mel Well’s book and really hoped that it’d help me change my ways of thinking.

I definitely had a few problems with this book, but overall it was good! The main message really came down to this: listen to your body, listen to your feelings, and love yourself the way you are. Pretty straightforward and you’d think it would be common sense, but Mel really opened up my eyes to a lot of things I hadn’t focused on before.

She talks about paying attention to how you’re feeling when you’re eating, and how you’re feeling after you’re eating. I practiced this a little today and it actually helped me rein in myself a few times when I would have otherwise eaten more than I should have. This didn’t take a lot of willpower–I just thought “am I actually hungry?” And the answer was no, so I didn’t pick up a bag of chips. Of course, sometimes things are more complicated than that, but the little moments add up.

Life is short. Don’t miss out on 95 per cent of your life just to weigh 5 per cent less. –The Goddess Revolution, Mel Wells

The writing itself was pretty informal, and Mel definitely takes more of a coaching stance than a teaching stance. It’s like a 300-page pep talk! This manner of writing comes with some cons, however. The book was really a compilation of inspirational messages with some testimonials peppered in. And the testimonials were exactly that–I think they were meant to be stories the reader could connect to, but they really just came across as sales pitches. I didn’t feel like I was sharing another woman’s story so much as reading an advertisement for Mel’s skill as a life coach.

The ideas just didn’t really feel fully-formed to me. The transitions between chapters were jarring and I was never really sure what I was in for next. I definitely found some techniques to help me improve my own life, but I also really felt that it could use some more direction. I wish there had been some fun exercises or activities that I could have done while reading. It would have been nice if there was a little more about how to turn these principles into actions, but I also understand that a lot of it is just retraining your brain.

I did have one issue that I really wanted to address, and that was one instance of cissexism that rubbed me the wrong way. The phrase I had an issue with was “Got a vagina? Congratulations. You are officially a real woman.” This mindset completely erases the very real experiences of trans women, who are also goddesses, and trans men, who can have vaginas but certainly are not women. I don’t think this was intentional or malicious on Mel’s part, but it is something important to be aware of. I think that it’s important to keep in mind how your words can hurt and exclude others.

Anyway! Overall, I loved the message of this book. I’ll almost certainly read it again, as I really want to cement a lot of these ideas into my head and incorporate them into my lifestyle. Thanks Mel Wells for putting out a book that has hopefully benefited many people and will continue to do so!

I'm just another girl in her mid-twenties stumbling through life. I spend most of my free time reading or taking walks through the city while I listen to podcasts. I love petting cats, going to the aquarium, and playing dnd. https://samesfoley.wordpress.com View all posts by Sarah

1 thought on “The Goddess Revolution”